An Overview of the Portuguese Language

Portuguese is the official language of many different countries, including Portugal and Brazil, as well as some African nations such as Angola and Mozambique. It is also popular in some Asian countries such as Macau. It truly is a global language, and the influence of Brazilian and Portuguese culture on the world in particular has improved its credibility and popularity among students.

Portuguese is considered the seventh most spoken language in the world, and the majority of Portuguese speakers are now in Brazil, South America. Modern Portuguese developed after the 16th Century with the influx of borrowed words from Latin and Greek due to the Renaissance period.

The History of Portuguese

Portuguese evolved from Latin in a similar way to Spanish after the fall of the Roman Empire. It has a number of influences from Latin as well as Arabic, like many of the Romance languages that were left behind by the Romans. In the 15th and 16th Centuries, Portugal developed by expanding their colonies across the world. For a brief period, the Portuguese were undoubtedly the world’s biggest economic and military power. This helped spread their native language to all corners of the globe, and the influence of this colonisation can still be seen today.

The first proven Portuguese documents are recorded as being from the 12th century. Although this is contested by a number of historians and language experts, a lender’s notice from 1175 is commonly thought of as the first Portuguese document ever discovered. 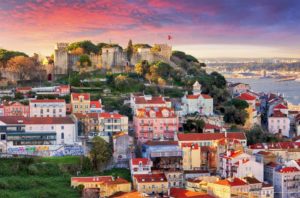 More and more students are beginning to recognise the benefits of learning Portuguese. If you are a student or native speaker of French, Italian, or Spanish – Portuguese has some similarities that may help in the learning process. The key to learning any language is to immerse oneself in the culture of the country. Watching Brazilian or Portuguese programmes on television and reading Portuguese language news websites is a perfect way of keeping your mind engaged with it, ensuring that the language remains relevant to real-time and real-world situations.

We take pride in creating apps that will help you to learn a new language. We do this by making them fun, entertaining, and challenging. It can be a long process to learn Portuguese, so our collection of Portuguese learning apps are designed to make it an enjoyable experience. There is always a place for formal lessons and textbooks, but in your downtime you need to stay engaged with the language and the culture. Overpass have created a number of mobile application games that will help you develop your Portuguese skills and complement your other learning perfectly.