An Overview of the Vietnamese Language

Vietnamese is a tonal language, and the official language of the country of Vietnam. It is spoken by about 75 million people worldwide, according to statistics gathered in 2007. The language didn’t actually gain official status within Vietnam until the end of French colonial rule in 1954.

It has a number of influences from other languages, and is considered similar to Khmer, Cambodia’s official administrative language. In its written form, the Vietnamese language uses the Roman alphabet and accent codes to indicate tones.

The History of Vietnamese

Vietnamese has a huge number of influences due to a varied history in the region over the past couple of centuries. Both Chinese and French have achieved massive influence over the Vietnamese language as well as its people, and Portuguese has also had an impact on how the language developed over time.

Chinese was the primary influence over Vietnamese for many centuries, with a significant proportion of loan words coming from Chinese dialects. The official written Vietnamese language made use of a slightly altered alphabet from Chinese, and put together some Chinese characters (Chur nom) and standard Chinese (Han tur) until the 17th century, when the modern writing system was developed (Quoc-ngu).

In the late 19th Century, the French invaded Vietnam and took over as the main influencers in the region, both in terms of language and culture. French rule saw the Vietnamese language labelled as “Annamese”. Due to colonisation, the French language was utilised as the primary official tongue for administrative use. Vietnamese was still spoken among the people, but there was undeniable influence from French, with a number of words being borrowed. 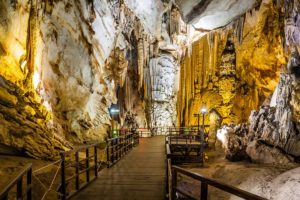 Languages from the Far East are becoming more and more popular among students across the globe. After many initiatives around the turn of the Millennium, Vietnam is now considered as one of the world’s fastest growing economies, which is attracting global business and improving awareness and interest in the Vietnamese people and their language. Learning Vietnamese is undeniably challenging, but with a Roman alphabet, the written language is perhaps more familiar to learners that some other Eastern languages.

We create apps that are enjoyable and help you to learn new languages. At Overpass, we have direct experience of learning new languages (Vietnamese and Chinese Mandarin in particular) and we understand how rewarding it is to expand your horizons in this way. However, we also know how challenging it can be!

Traditional learning techniques are essential to improve your knowledge, and regular practice and immersion in culture is the key to becoming fluent. However, you sometimes need another stimulating resource to help you learn, and our iPhone and Android games provide you with a fun and enjoyable way to improve your language skills.