An Overview of the Spanish Language

Spanish developed from a form of Latin left behind by the Roman Empire. The influence of the Church and the official Latin texts maintained the Romantic aspects of the language, and influence from other nearby dialects such as Portuguese and Basque developed Old Spanish gradually into the language that we know today.

Spanish is now one of the most widely spoken languages in the world, and can be found across the globe from South America to Africa, and of course, Europe.

The History of Spanish

Christopher Columbus’ journey to the “New World” is important for so many reasons, and was one of the events that has shaped the world as we know it. The following centuries saw many Spanish explorers follow in Columbus’ footsteps, conquering native forces and setting up communities in South America. This brought about a huge cultural shift in the region, with Spanish quickly becoming the main language in lots of South American regions. Even when countries such as Mexico and Argentina attained their independence, their version of the Spanish language was so ingrained into their culture that they continued to speak it.

In 18th Century Spain, the Royal Spanish Academy standardised the Spanish language – ensuring that there was an official language by producing dictionaries and guides designed to encourage standard Spanish. 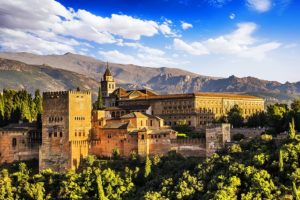 Spanish has recently surpassed French as the second most learned language in the world. It’s usefulness grows over time, and the influence of South American culture on the USA and the rest of the world has had a big impact on the popularity of written and spoken Spanish. In fact, the demand for Spanish lessons has doubled in the last decade.

The key to learning Spanish is to immerse yourself in the language, the culture, and the food. Being in Oxford, we are at the centre of the learning world, and due to the strong student presence,we have a large Spanish population for a small city. This brings unique opportunities to meet Spanish people, enjoy their music, their cuisine, and their sense of humour. If you get a chance to immerse yourself in culture while learning a language, it will certainly help. The more fun you have, the better you’ll learn the language.

Overpass Apps are keen to make sure that you’re keen about learning languages! That’s why we make our language learning apps fun and entertaining. Although still challenging and mentally stimulating, we believe that our apps provide the perfect balance for any Spanish learner. Nobody wants to grind away reading Spanish grammar guides and dictionaries, forcing themselves to learn slowly and painfully. Instead, people like to learn in different ways, to keep their mind active, and to engage with the language that they are learning. Our Spanish learning apps will help you in your quest to learn this beautiful European language.